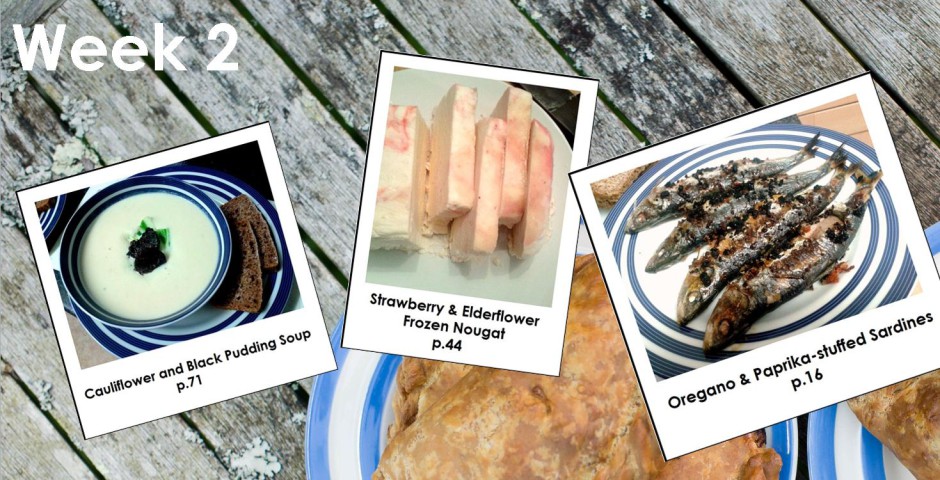 Confession – my cookery skills, as extensive as I think they are, are incredibly limited. I have never gutted a fish. Or descaled a fish. Or really done anything at all with a fish that didn’t involve just eating it. I also didn’t anticipate how difficult it would be to find some sardines despite living on the coast – generally avoiding supermarkets means that you’re rather limited in terms of fishmongers without heading directly to Newlyn and grabbing them the minute they’re landed. Managed to find some in the end from Tregida Smokehouse, who were lovely enough to sell me 6 beautiful sardines, whole and completely intact. An hour or so of poring over Rick Stein’s English Seafood Cookery and I was scraping (shudder) and gutting (even bigger shudder) those sardines like a pro. Well, not really, but it’s all relative.
Strawberries and elderflower didn’t turn out to be an issue at all – The Cornish Food Box Company and Cornish Food Market are still selling Cornish strawberries (I also stocked up on raspberries for a later recipe), and I made an excessive amount of elderflower cordial and froze it back in June. It was a good week though, all in all – hearty recipes, new skills, and some darn good eatin’.

Once you’ve appropriately sanitised your sardines (see above), Paul Ripley’s recipe is so quick and easy it’s difficult to believe how good it’s going to taste. They were gorgeous as a light, look-at-me-being-so-healthy dinner with bread and salad, which actually fills you up. Obviously I didn’t BBQ them (note the time of year), but they’re definitely a lovely summer option that could easily replace the tired, flat beefburger, and the skins crisp up and absorb all of the lovely flavour combinations. Don’t take your eye off them for a second while they’re under the grill though (see my slightly charred photo), and do mind the bones.

Paul Ripley (head chef at the Mariner’s, Rock)’s recipe is on page 16 of the Great Cornish Food Book

Cauliflower and I have a love-hate relationship: I am not its biggest fan (there are about a million other vegetables I’d rather eat), and it keeps showing up at our house (via my veg box), and then sits there in the kitchen making us feel guilty, until one of us relents and bakes it covered in cheese. It was refreshing to find a recipe that utilises the wintery flavour of the cauliflower but balancing it with something hearty and salty like Black Pudding. I opted out of truffle oil, but it would add that extra indulgence and richness to an already sumptuous recipe. Really, genuinely tasty and quick to make, and went down well as a late afternoon lunch on a Sunday. Perfect.

Stuart Eddy (of the award-winning Victoria Inn, Perranuthnoe) created this recipe – on page 71 of the Great Cornish Food Book

Ok, so this was meant to use wild strawberries, but I haven’t laid eyes on a wild strawberry since about 1992, and anyway – it’s October. Was actually amazed how easy it was to find English strawberries, let alone ones from Cornwall, so took my blessings where I could. This recipe involved buying a sugar thermometer, but I’ve always wanted one, and Lakeland do a clever one that’s built in to a spatula that cost about £15. A lack of extra-long loaf tins meant that this recipe fills 2 of them (be warned), but it was so good that I kept one at home and took one to the office, which earned me massive brownie points with the CFD team – always willing participants in any kind of tasting activity! The honey flavours really come through, and blend beautifully with the elderflower and the strawberry without being cloying. A very sophisticated, rich but light dessert – will definitely be making this again, and two loaves is never a problem.

Fiona Were is head chef at Mullion Cove Hotel; her recipe is featured on page 44 – you can also find it here