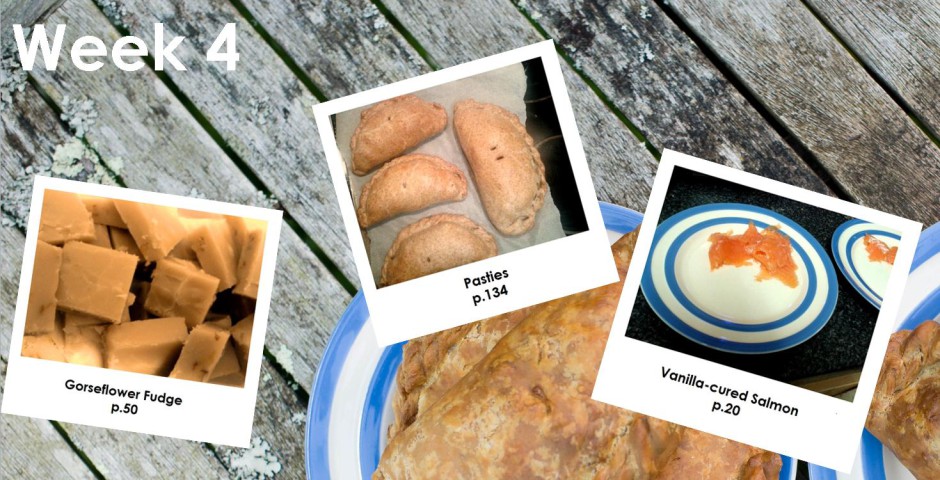 Been a bit of a slack-Alice on the blogging front, due to lots going on at Cornwall Food & Drink HQ (we don’t just run a food festival, you know – there’s lots more to it than that!)

That said, it was a week of interesting firsts, new flavours and controversial methods in my week of cooking from the Great Cornish Food Book, with some late nights and high temperatures thrown in for good measure.

Ever tried asking around for advice on pasty-making? It’s a minefield –everyone’s got their own tried, tested and perfected methods, and a few people’s pepper ratios are (in my humble opinion) waaayyyy out when it comes to flavouring this quintessential Cornish staple.

Read on for rule-bending, mould-breaking, and amateur crimping a-go-go…

Recipe 11
Gorseflower Fudge
Time taken: about half an hour
Perfect for: Winning favours in the office or giving as Christmas presents

I’ve never made fudge before; it always struck me as one of those elusive techniques where everything needs to be just right – the molten temperature, mainly, and traversing that fine line between golden, caramel-y sugar and utterly inedible carbon. But, armed with my lovely new thermo-spatula toy, I was feeling pretty invincible. Then, I had a scan through the recipe and thought, ‘That’s all there is to it? Surely not.’ Well, surely enough there is – fudge is one of the quickest and easiest things I’ve made in this book so far. Honestly.

Obviously, it’s not one to make with your three-year old (the temperature needs to rise rapidly to 120’C before being vigourously beaten and cooled), but that’s basically all there is to it – just whack in some flavour and you’re away.

Flavour in this instance was the generally favourable but somewhat controversial gorseflower – a coconutty, bright-yellow flower who’s heady perfume instantly evokes summer living on the North coast clifftops. People seemed surprised when they bit into fudge that contained flowers, but the general consensus was that it’s a lovely sweet treat, and the buttery richness of the fudge balances the flavours perfectly. Even better, with my confectionary gremlins banished, I’ve already got a weekend of fudge-concocting pencilled in to make edible Christmas gifts.
Move over, Mrs Claus.

The recipe for Gorseflower Fudge, by Adam Clark of the Bedruthan Hotel, is on page 50 of the Great Cornish Food Book

Recipe 12
Vanilla-cured Sea Trout
Time taken: 10 minutes, max, plus
Perfect for: A sophisticated starter or (in my case) an amazing accompaniment to scrambled eggs on toast for breakfast

Right. Confession. There is no sea trout to be found at the moment, people. It isn’t actually sea trout season (confirmed by a quick check of my new favourite seasonal fish-sourcing calendar from Wing of St Mawes), but at any rate, nobody’s been catching it recently, and I couldn’t track any down by hook or by crook.

Salmon is always the recommended substitute for sea trout, but if you’re really trying to cook Cornish as much as possible this involves a fair bit of soul-searching before you grit your teeth and brave the supermarket fish counter to hand over a small fortune for half a salmon that was caught 600 miles up the road in a loch. Still, had to be done – the salmon was responsibly sourced and from the UK, so I didn’t lose too much sleep over it, especially once I’d tried it.

Introducing the other easiest-peasiest recipe in the Great Cornish Food Book – this involves literally five minutes of prep, a bit of patience (36 hours’ worth) and some rinsing, and you’re ready to go. It’s perfect – sophisticated, tasty, healthy, and very moreish. I love it.

Recipe 13
Pasties
Time taken: 1 hour, plus pastry-resting and pasty-baking
Perfect for: It’s a pasty. Name me a time when it’s not appropriate to eat a pasty, seriously.

Another first for me this week. I’ve never made a pasty. I’d always figured that when you live in a county where pasty shops are easier to come by than post-offices, why would you need to? I have always wanted to try my hand at crimping, though, so this was a perfect excuse.
The butcher in St Agnes helpfully diced my skirt (!) for me, so all I had to do was prepare the veg and the pastry, pull it all together and bake it. Crimping is oddly therapeutic  – though my efforts were a bit on the scruffy, ugly side. I had to use wholemeal flour too, due to it being Sunday night and all the shops were shut, but that turned out ok.

My pasties tasted pretty good. I’ve since had it recommended that I should have added a bit of butter to the filling to get the juices going (honestly, writing about making pasties is innuendo-central, I can’t help it!), but the recipe didn’t mention that. I also ended up with seven pasties instead of the prescribed four – I don’t know how that happened.

In all honesty, though making a pasty is obviously a rite of passage that anyone claiming to be a proper Cornish maid should really undertake, now I’ve done it, I’ll probably leave it to the experts and just keep buying them ready-made.

I had a few moral issues with this one. Asparagus, as you know, does grow in the UK – during a brief, wonderful 6 week period in May when it’s all you can find on any restaurant menu. All other times of the year, asparagus comes from halfway across the world – namely Peru – which at the last count was just under 6000 miles away. If you’ve tried Cornish asparagus, you’ll understand my snobbery here on flavour terms alone.

I decided fairly early on in the Challenge that in principle, I’m not going to buy woody, sad, comparatively-flavourless asparagus from a country halfway around the globe that was probably picked about a week before I eat it, in order to complete a recipe that specifically recommends using fresh Cornish asparagus.

Instead, I’m going to honour this gorgeous recipe (by Gwel an Mor’s Joe Lado Devesa) by making it obsessively come May next year, when the asparagus I use comes from 6 miles away, not 6,000.

Hope you can understand 🙂

Joe Lado Devesa’s recipe for Cornish Grilled Asparagus is on page 77, or you can find it here

To order your copy of the Great Cornish Food Book, click here

Have you cooked any of the recipes from the Great Cornish Food Book? We’d love to hear how you’re getting on! Let us know on Twitter or Facebook 🙂