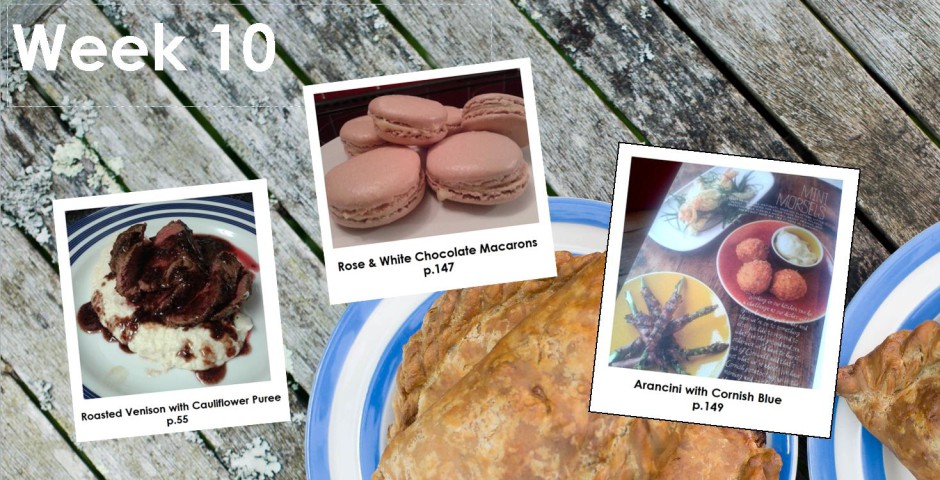 The final week! Again, not the best planning ahead I’ve ever done, in terms of allocating my time to cook the last final recipes in between Christmas prep and the last few manic days of work before the break. Still, I got ahead of the game early on by making Nicky Grant’s Rose and White Chocolate Macarons on Sunday night and heading in to BBC Radio Cornwall to dish them out to Tiffany Truscott and other willing taste-testers, and spent the following days resting on my laurels. That combined with some rich Roasted Venison and Cornish Blue Arancini from Fifteen Cornwall, all made for a week of splendid eating, and a perfect way to end the Challenge.

Recipe 29
Nicky Grant’s Rose & White Chocolate Macarons
Time taken: about 2 hours (but probably could’ve been less than that if I was more deft with a piping bag)
Perfect for: General elegance. Macarons are just so darn classy.

I’ve never made macarons before, always assuming they were too much of a faff to really be worth it. Half right, as it turns out – if you’re new to the methods, as I was, then it takes a little longer than you might hope. It also takes up every available surface you have in the vicinity, as your mixture goes further and further and you branch out from the 1-2 baking trays you’d expected to use onto pie dishes, cake tins and lasagne platters. Anyway, turns out the surplus was a good thing, because a few of my lovely little macarons came out looking like clay thrown at a wall – obviously, I only used the most photogenic ones in my picture and shoved the more shameful specimens to the back of the freezer. I did get about 60% looking good though, a figure that should hopefully increase the more I make them. The white chocolate ganache is gorgeous – the rose water isn’t too intense, though as Nicky says, it’s best to add to taste rather than all in one go. I loved these in the end, the flavours are rich but subtle, and they get even better after a day or two left to infuse in an airtight tin. The effort is definitely worth it. I even got Twitter praise from Nicky herself for the ‘feet’ (the crinkly bit around the base of each macaron half) – how’s that for ending on a high.

Recipe 30
Ben Prior’s Roast Venison
Time taken: About half an hour, which was pleasantly surprising
Perfect for: Unusually enough, an indulgent midweek dinner

This is one of my favourite recipes in the book, though I’d always had a sneaking suspicion that given the glowing reviews that Ben’s Cornish Kitchen receives at every turn, this would probably be the case. It’s perfect, clever use of flavours and simple ingredients, with not too much prep time and even less cooking time. The venison, annoyingly enough, didn’t come from the Cornish Venison Company – being Christmas week they were busy each day serving up venison burgers rather than selling cuts of meat to cook at home – so we used some from the local butcher in St Agnes again, who’s come to be a bit of a godsend in the last couple of months. I didn’t use cep mushrooms, I had some dried Porcini ones in the cupboard, but the idea of pulverising some as a seasoning in their own right is genius and tastes amazing. Likewise, maybe pureed cauliflower isn’t really a revelation to a lot of people, but it isn’t something I’d ever tried on the basis that cauliflower can’t be made to taste good. Turns out I was incorrect – anything can be made to taste lovely if you add enough cream (and I definitely added enough cream, trust me). A lovely winter-warmer supper.

Recipe 31
Fifteen Cornwall’s Arancini
Time taken: About half an hour, plus rice cooking time
Perfect for: Festive canapes, if you can resist eating them until people arrive

The recipe for these lovely little morsels in the Great Cornish Food Book wasn’t exactly a recipe per se, more a set of guidelines and recommendations on how to Cornish-up an Italian dish for which Fifteen Cornwall is famous. After a bit of trawling through recipe books, I found a good general Arancini recipe in Hugh Fearnley-Whittingstall’s Veg Everyday and used that for basic method and ingredients (though on reflection, maybe I should’ve used Jamie Oliver… Oh well). All went fine, and Cornish Blue is, as ever, a splendid addition to the recipe – indeed, it was half the reason I chose this one over the Pancetta-wrapped Asparagus (out of season) and Stuffed Courgette Flowers (ditto).

However, being in a festively forgetful mood, I managed to neglect actually photographing my finished Arancini before I dished them out to people, so you’ll really just have to take my word for it.