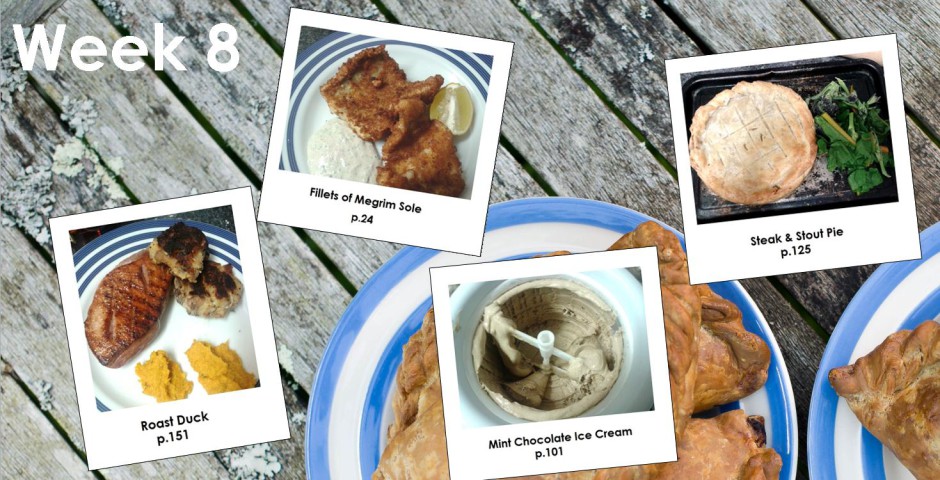 We’re into a hearty, indulgent phase of the Great Cornish Food Book Challenge – perfectly timed for the week when the “Winter Bomb” hit the county, bringing strong winds, horizontal rain and strong desire to never ever leave the house.

It was a really good week, both in terms of ingredients accessibility and the recipes themselves – each one was fun to make, some with slightly more fuss than others, but all a big step out of my usual culinary comfort zone.

It’s a common misconception that the book isn’t particularly seasonal, predominantly perhaps because the sun is shining in all of the pictures. This is definitely not the case though – there’s plenty to be made that call for drawn-in dark nights, a really decent bottle of ambient-temperature red wine, and less care for your waistline than you might have in the height of summer, because you can just put a really big jumper on and nobody’s any the wiser.

This week we heard from some of the gastronomic masters of the Cornish food scene. Read on for tried and tested recipes from the kings of high-end indulgence…

Recipe 22
Steak and Stout Pie
Time taken: 2 hours-ish (mine took longer because I used a slow cooker)
Perfect for: When you really want an amazing pub tea, but the wind is blowing just that bit too hard for you to actually put your coat on and leave the house

I love this recipe. Love it. I don’t know about you, but I’ve always shied away from making those really hearty, tasty, wintry pies that you get in the local pub, because I just didn’t think my pasrty would be up to it, or that I’d hit the nail on the head with the richness of the filling. If that’s the case with you, then this is the recipe you need to try.

One confession. Despite this being a St Austell Brewery recipe, in my limited-time mad dash around the various small shops and markets during the week, I picked up a Porter by a local micro-brewery instead, as opposed to the 1913 Stout that chef Nick Hemming recommends, which worked just as well. Anyway, I slow-cooked the filling over a whole day whilst at work, then came home to a lovely, rich tenderised stew which was moreish even on its own. After that, you just whack into a pastry case, into a hot oven and in 40 minutes you’ve got a proper pie worthy of any you’d find in the local pub, coupled with the sense of satisfaction that you’ve made it yourself from scratch. Lovely.

Had some frustrations with this recipe, all of which were ultimately ironed out in the end result. Firstly, it uses Tregothnan’s Chocolate Mint Tea, an ingredient that’s seems to be as rare as hen’s teeth, from a normal shopper’s point of view. I couldn’t find it anywhere, which meant using normal Tregothnan Peppermint Tea instead. I also divided the recipe down into three, because I was a bit freaked out at the idea of using 20 eggs to make custard which in my experience, has a fairly sporadic success rate. Anyway, it worked fine, but the peppermint tea turns the custard an odd off-grey colour, but when you churn it to ice cream it reverts to a more palatable greeny hue. It’s easy to forget, when making your own ice cream, that your bog standard Mint Choc Chip stuff that you’d get in the supermarket has often been pumped full of lurid green food colouring.

On a different level of difficulty that had nothing to do with the recipe itself, I had to halt the process for 24 hours when my ice cream churn died a death, necessitating a stomp to Lakeland to exchange it for a new one, then refreeze the bowl you make it in. Grrrr…

This recipe’s all-natural flavours (which The Scarlet’s head chef Tom Hunter is famous for) produces a result that tastes fresh, light and almost healthy, until you remember all the double cream that goes into it.

Initial ‘mares about tracking down Megrim Sole (see previous worries about the lack of open-all-hours fishmongers in Cornwall) were finally allayed this week when the wonderful Ruth Huxley made a trip to Newlyn and picked some up for me. They’d been specially prepped too – so I had the pleasure of not having to fillet them at all, which was wonderful (though there is a brilliant breakdown of how to fillet a sole step by step, by Padstow Seafood School’s Mark Puckey, on page 25 of the book).

This recipe is one of the easiest in the book that I’ve come across to date. Quick, efficient, tasty, and gorgeous-looking. I was initially sceptical, but during this challenge it’s become a bit of a rarity for me to start cooking something out of the book, and to not only have finished making it within the hour, but to have eaten it and washed up into the bargain.

Rick Stein is one of those chefs whose just got a knack for giving clear, concise instructions to produce dishes which not only take minimal time and fuss, but also make you feel like a serious seafood-cooking aficionado – pausing between mouthfuls to proudly announce to the table that “I made this. Nice isn’t it? Yes, but I MADE it! All by myself!”

Have it with chips and peas, and you’ve got a perfect Friday night dinner.

After a long hunt high and low for the Cornish Duck people (who weren’t at Truro Farmer’s Market on Saturday), and crestfallen peer through the fence at the recently-closed Butcher at Calenick near Truro, I had to go for Gressingham Duck from a Cornish butcher. Yes, I know that doesn’t count as Cornish produce, but I was a bit stuck at this point on a Saturday afternoon.

Anyway, it turned out to be a mistake, because the Gressingham Duck was really tough for the minimal pan-frying time in this recipe, which was such a shame because the other elements within the dish are gorgeous. There’s a lovely mix of warming spices to both the cardamom carrots and the pre-roasted duck legs, which goes down really well with a red wine deglaze, and some winter vegetables (as recommended in the recipe).

My ballotine didn’t turn out as hoped. I have no idea why, but what was meant to be neatly cut slices of roasted leg meat in a crisp shell just morphed into duck fritters, which I then managed to burn in the frying process.

All in all, I was really pleased with this, but I’d source my duck a bit more carefully next time around.

Tim Pile is head chef at the Rosevine Hotel, and his recipe for Roast Duck is on page 151 of the Great Cornish Food Book. You can also find the recipe here.

To buy a copy of the Great Cornish Food Book (and to be in with a chance of winning a hamper of Cornish goodies) click here.