We are one!! Our first anniversary business press release – 16.6.17 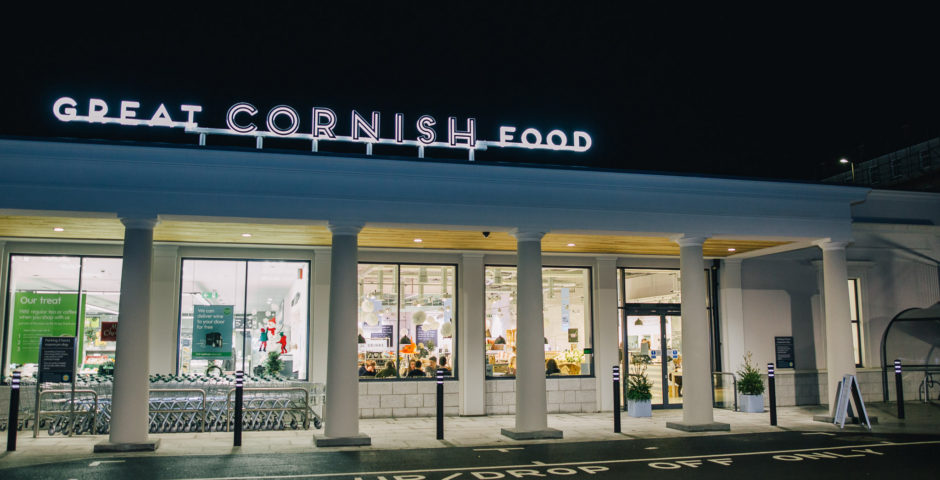 The Great Cornish Food Store, an independent food hall dedicated to celebrating and promoting local produce celebrates its first birthday on Friday 16th June. The pioneering, 7-days a week operation opened its doors one year ago and has uniquely transformed the way both locals and visitors to the county shop for local produce.

The Great Cornish Food Store is co-located with Waitrose in Truro.  The ground-breaking ‘shop within a shop’ concept is the first time a major multiple retailer has been involved with an independent local food operation in this way. It came about as a result of a forward-thinking planning condition associated with the development at Tregurra Park, home to Truro’s Eastern Park & Ride. Cleverly designed with convenience in mind, the two stores share a free customer car park and anyone using the popular Park & Ride service can swiftly reach the stores via the Hub building at the centre of the site or by using the bus stop near the entrance to the stores.

The Great Cornish Food Store is home to over 2000 lines of local produce and has its own popular fishmonger, butcher and deli counter. In the kitchen, the chefs use the wealth of fresh seasonal ingredients from the store to prepare simple but excellent quality dishes for the all-day café menu as well as for the deli and take-away. The overriding aim of the operation is to make local food more accessible for the huge proportion of households that want to buy more local produce but need it to be a convenient option – i.e. as easy as supermarket shopping.  The store is therefore open 11 hours a day, Monday to Saturday and 6 hours on Sunday, and with the chance to combine local food shopping with their supermarket shopping next door, using the same trolley, customers have never had such a convenient way to buy local.

Over the year, customers have used the store for a complete mix of everyday and speciality items, many visiting several times a week. Here are five tasters of what customers have bought from the Great Cornish Food Store over the last year:

A popular misconception is that the Great Cornish Food Store is operated by its neighbour Waitrose. In fact, the store was created, designed,  financed and is owned and run by Ruth Huxley, known to many as the name behind Cornwall Food & Drink, the industry network organisation that puts on the annual Great Cornish Food Festival in Truro each September.

With her background in the development of Cornwall’s food and drink sector, which has become such a success story for the county. Ruth’s ambition was for the store to become not only a permanent showcase for Cornwall’s superb food and drink produce, but also a platform for further sustainable industry development.   Since opening, at least one micro producer is investing in new facilities to expand production due to the increased demand by the store. A larger supplier has also been chosen by a major supermarket to be stocked nationally, after spotting their products at the Great Cornish Food Store.  The store helps suppliers in making their products market-ready, with the experienced team sharing advice on bar-coding, branding, product formulation and pricing, for example.  Attracting locals as well as visitors to the county, the store promotes quality, excellence, provenance and innovation.

Reflecting on a roller-coaster first year, Ruth Huxley said, “We’ve been on a very steep learning curve but everyone has achieved so much, including winning two major awards and reaching our sales target spot-on. This is very much a team effort; our staff, suppliers, customers and the wider business community have all been fantastic and we will continue to innovate, grow and develop. This industry has changed so much in the last 15 years and I am proud to play our part in its continuing development and success”.

Opening times and more details about the store can be found at: www.greatcornishfood.co.uk/store

Notes to editors: A selection of images is attached for use, for high resolution images, interviews or further information please contact: Claire Vickers, Director of Marketing at Great Cornish Food Store on: 01872 306060.

A year in the life of the Great Cornish Food Store: