In conversation with our butchery team 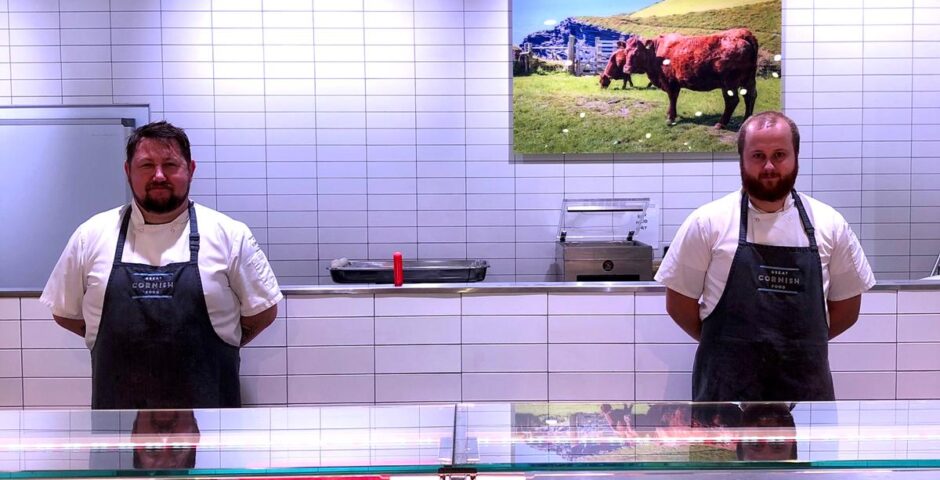 This week is Love Lamb Week – an ideal excuse, we thought, to catch up with our butchers, Dan and Ross. Dan’s been with the store since it opened in 2016; Ross joined just as the country went into lockdown…

Dan – you’ve been with the Great Cornish Food Store since the start. What led you to join the team?

Yes, I joined the store on day one, initially working in the kitchen. I live quite close by and used to play on the site of this development when it was a field. For a long time, I’d heard there was to be a shop dedicated to Cornish food and drink and I thought that would be pretty awesome.  I was running Domino’s Pizza at the time it was being built (and over the years I’d worked in a number of kitchens and food establishments around Truro). When I heard that Paul Ripley was going to be joining the team, I knew I wanted to be a part of the shop in whatever capacity. So I worked in the kitchen for about a year, initially as a kitchen porter – just because I wanted to be here and learn from the best. Then one day when Paul Livesey, who’d arrived at the store from Harrods, needed some help in the butchery, I went to lend a hand. And that was it for me…

So you trained to be a butcher here at the store?

I did. After about a year, I moved from the kitchen section to the butcher’s counter. Not many people get the opportunity to learn from a butcher like Paul Livesey.  He was so knowledgeable – and is the most talented butcher I’ve ever known. It was intense learning from him, but brilliant. He remains my mentor and we’re still in touch even though he found Truro too quiet and headed back to London.

I guess I was destined to be a butcher all along… my great grandfather was one. I love the precision work and the presentation side.  I also have a lot of respect for the animals. It is important to make the most of them and to treat them well – not only in life but also beyond.  You can definitely tell the difference between an animal that’s been well looked after.

Ross, what was it like joining the store during lockdown?

It was a strange, difficult time for everyone. I like the retail environment, being in a shop chatting to customers and hearing their stories. I also like working with all different meats – and making the displays look good on the counter. So when our doors were closed to walk-in customers for those first few weeks, it wasn’t easy. However, it allowed me to get to know the store behind the scenes and to get to know the team. So that was useful. Obviously, it’s much more enjoyable now that we’ve got lots of walk-in customers to serve.

How did you come to be a butcher, and where were you before joining the Great Cornish Food Store?

I grew up on a farm in Probus but knew I didn’t want to follow my Dad into farming…  it’s full-on, day and night in all weathers, so it didn’t appeal too much. But I’ve always been good with my hands, and obviously understood animals being around them all my life.  Becoming a butcher seemed like the natural way to go.  After school, I received an apprenticeship through the Duchy College scheme and worked at my local farm shop. From there, I joined Lobbs farm shop which is where I gained the bulk of my retail experience. And then I joined the Kernow Sausage Company for three years. That was a different style of butchery – you learn new skills everywhere you go – but I’m glad to be back in a shop environment now.

For a single cut, it has to be a rib-eye steak. It’s full of flavour, very tender and has just the right amount of fat content: simply cooked in a griddle pan or under the grill.  For a roast, it’s definitely a shoulder of lamb. It’s a lovely sweet meat and, cooked properly, it’s delicious.  Whilst I enjoy cooking, I wouldn’t say I am amazing at it – but at least I know how to prepare it well!  A traditional cushion of lamb, which is a boned and rolled shoulder tied with strings into a cushion shape, then slow cooked with roasting salt and sprigs of rosemary, looks very impressive when served up. It’s quite a display piece, with the added bonus of being easy to carve!

I love roast topside of beef, not just for the fond memories at home but also for the taste. My mum likes her roasts well done, but once I learnt how to prepare beef at home and realised how tasty it is rare, it transformed the experience! The grass-fed moorland beef from Philip Warren here at the store is by far and away the most tender I’ve ever had.

Second on my list is a beautiful leg of lamb, studded with garlic and rosemary and roasted on a bed of onions, which is used as the gravy base. Then, I get one of Baker Tom’s focaccia breads and dip it into the left over juices and gravy.  It can’t be beaten – although one of our customers tells me she makes a paste of anchovies, peppers, rosemary and olive oil and rubs that into her lamb joint before roasting it in the oven.  I’ve yet to try it, but that sounds pretty delicious too!

Enjoy our Cornish lamb this week and every week from our butchers, who will be only too keen to prepare any cut you like, and to offer you cooking suggestions and suitable accompaniments! And that goes for pork, beef and chicken too (and other meat such as venison and duck when in season).